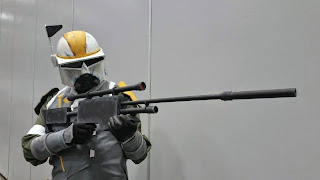 Here's another article to help out the folks who want to build a Rako Hardeen costume....if any of you are out there!

After Dredd, I decided that I would like to make something related to Star Wars, since we totally love everything Star Wars around here. Before even thinking about this, Steven convinced me to watch The Clone Wars cartoon series and I got completely hooked. Though I had to skip some Jar-Jar and Droid episodes, I thought that the series was very, very cool. In particular, I liked the Season 4 story line with Obi-Wan disguising himself as the famous bounty hunter, Rako Hardeen.

Really, this is all about the Obi-Wan version of Rako Hardeen. In the story line - which I don't want to spoil too badly - the Jedi ends up infiltrating a bounty hunter group from prison. In a great display of The Clone Wars detail, Rako's actual wardrobe is similar, but not exactly the same as the outfit Obi-Wan builds after they escape from prison. I like the look of the post-prison uniform, so I decided to build that. Technically, this is an Obi-Wan Kenobi outfit.

So, where to start? I went online and did a lot of image searches.

I also looked for some people who had already done Rako, and found only a few - this was going to be hard. First, I needed to sort a helmet. No one is making a helmet online, and EVA foam seemed impossible.  Luckily, my friend Devon had just gotten into doing some commission work, so I asked him to whip me up a helmet. I figured that if I could get that, the rest would be easy. 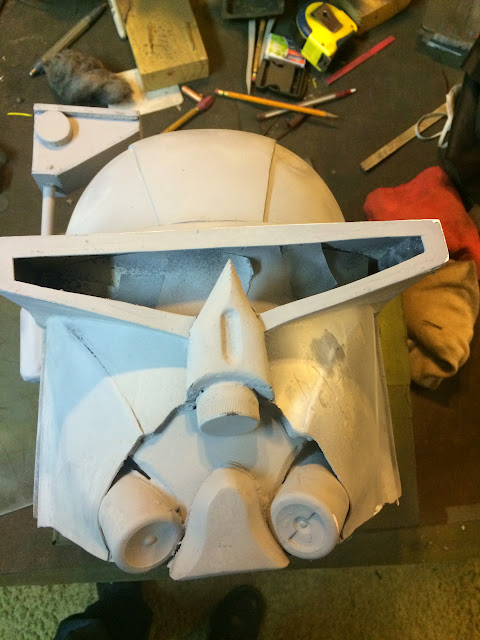 In the middle of making my helmet, Devon decided to join the Army! That was great news overall, but he did have to rush through getting the helmet together. He started with an old Hasbro Boba Fett lid and customized accordingly. For this build, I was going for about a 6 out of 10 for screen-accurate. Devon did a great job with the time and budget constraints - this thing is great! 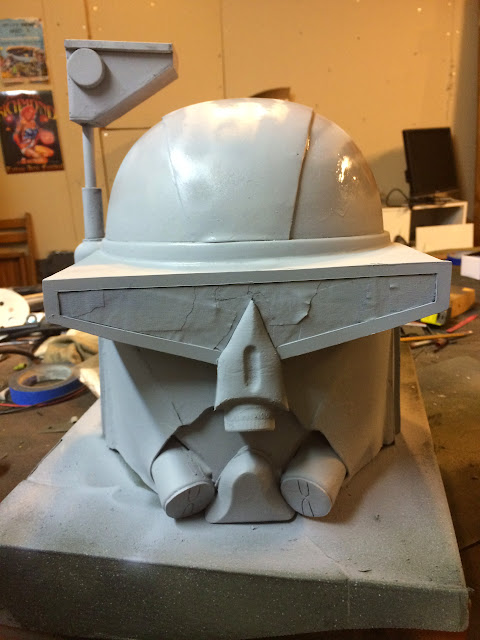 I added just a few details to the breather mask and installed a dark welding visor. I masked everything off and primed with an auto primer. I went with grey because of the white and yellow colors needed for the build. I thought black would be too dark. 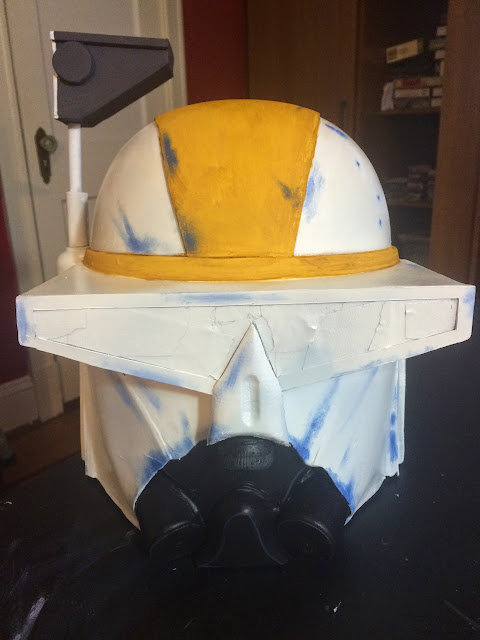 I spent a LOT of time looking at the cartoon with Netflix, and matched the yellow pretty well.  The next thing was deciding on a color for the wear spots - I went with a blue-navy. The lighting in the cartoon is sometimes kind of weird, so it is difficult to tell where they are on the blue-grey spectrum. I tried to mimic the show closely. 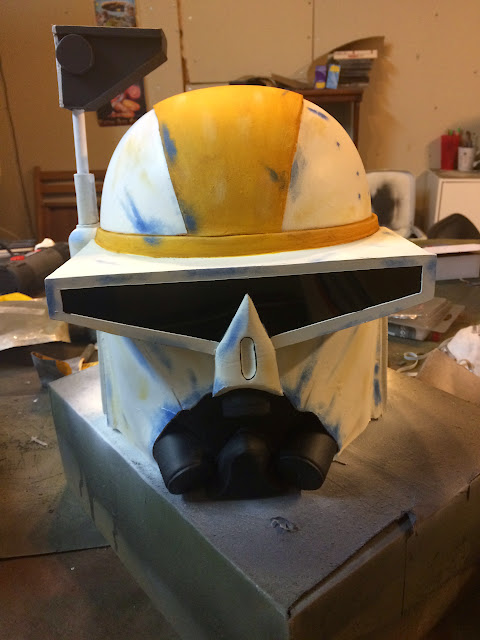 I added a little detail, staining and drybrushing to the yellow areas. I also used some tans to add some texture to the white areas, per the show. 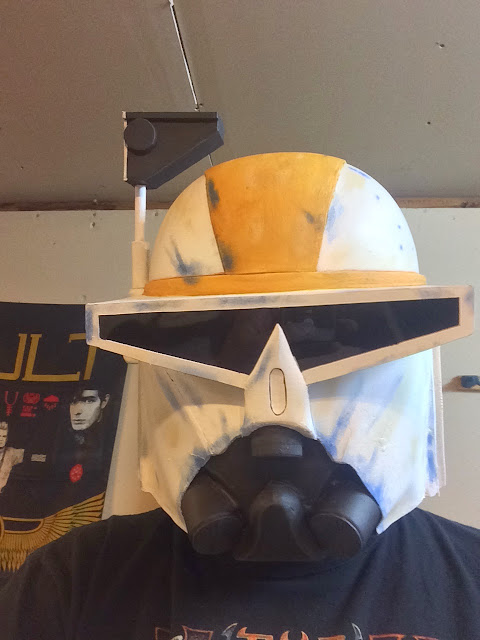 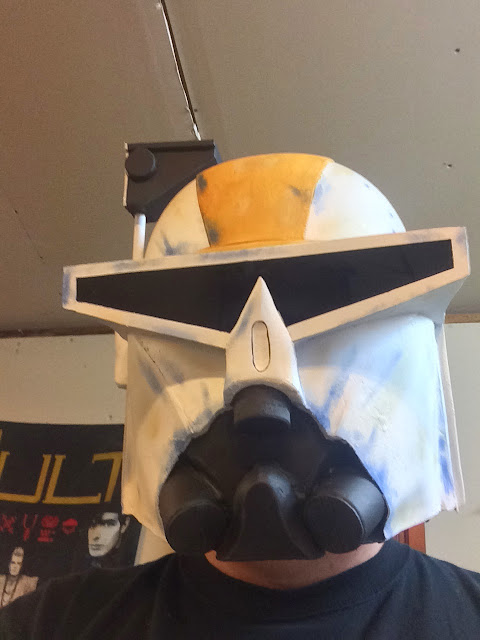 I still have some improvements that I would like to make to the helmet - it is not perfect. However, most people - even 501st Legion people - have no idea who Rako Hardeen is, so I am not sweating it too bad.

The vest was the next major piece. I figured that canvas would be a good, natural fabric to work with - it might even breathe! I found a good grey color online and ordered a few yards. At the same time, I found some fake fur type stuff - sherpa - and ordered a bit of that for the build.

I used a vest I already had for a pattern and went to town! I actually hand-sewed the shoulder together, but I glued and used Velcro on the rest. The right side has Velcro running all the way down the side to make for easy removal of the vest.

I made the comms device out of EVA foam, backed by some kydex for rigidity. To glue it on the vest, I used the best glue ever made: E6000.  If you have not used E6000, please order some. It is flexible, strong and you can use it on washable garments!

I cut the metal tabs on the vest out of some leftover aluminium flashing that I had in the garage. Use tin snips - a great all-around tool - to cut them. Take some sandpaper or a file and clean up the edges so that they are not too sharp or snag.

Another big item to get were the green fatigues that Rako wears. I searched around and found some good pants and a coat. I took as much as possible off of the coat, as you really only see the arms - pockets and buttons had to go.

I did have to figure out how to get the 2-tone look to the pants. I ended up getting some advice from friends, and used a mix of 1-to-4 bleach to water in a spray bottle. I used some tape to mask off the other parts of the pants.  I think it turned out ok. 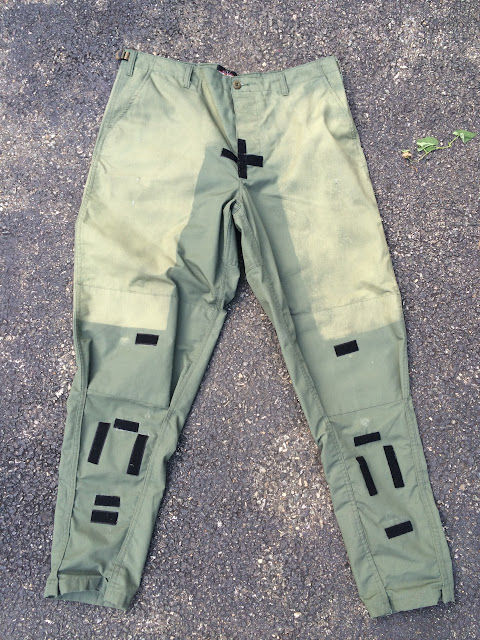 The Velcro you see on the pants is NOT sewn on - I used E6000! The leg and shoulder armor is just EVA foam cut to fit and painted. Pretty easy stuff. 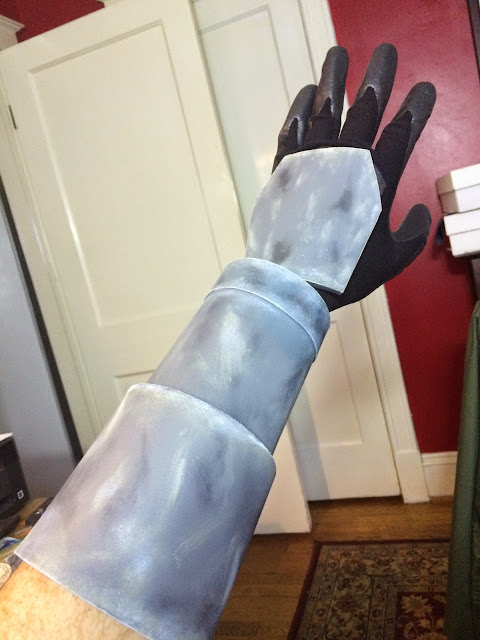 For the gauntlets, I used some cheap gloves and 1/4" EVA foam. For the EVA, I covered it all in Plasti-dip, then primer, then Mod Podge sealer, then Testors Dul-cote. Everything is fairly durable. The cool thing about these gloves is that they actually work with my phone's touchscreen! I glued the armor on the back of the glove and left the rest of the gauntlet separate. I put on the forearm, then the glove. I tuck the glove under the gauntlet to hide it. 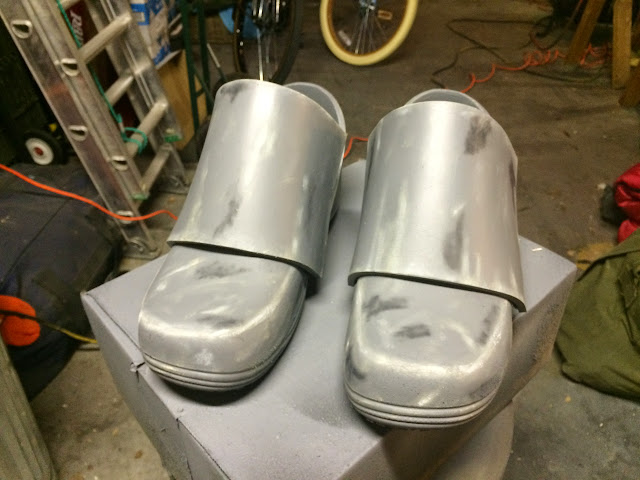 Rako has some pretty simple looking shoes, which are hard to replicate with commercial products. I did find some shoes that were pretty close and picked them up at the local store. I had to use a sander to take off the seams, but that was really easy. I then used 1/4" EVA foam to make the covers and the heel armor. The heels are glued, but the covers are attached with Velcro for easy removal. 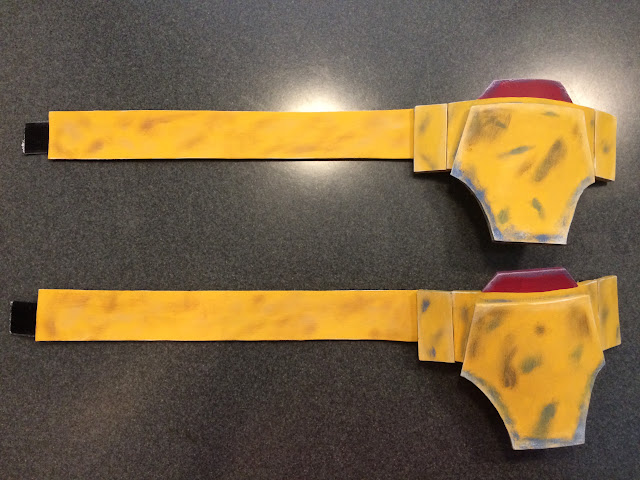 For the knees, I again used EVA foam in the 1/4" and in the 3 mm variety. I attached the EVA to some 1" webbing I had and used Velcro for the attachment points. Matching the paint was not easy and there are not a ton of clear shots of the knees in the cartoon. Again, Velcro to attach the knees to the pants. 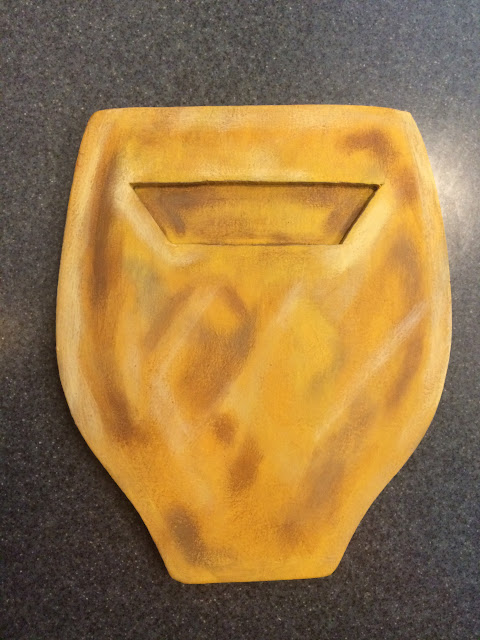 The codpiece is simply EVA foam. For the detail, I cut out the appropriate shape and re-glued it in place after sinking it a bit. Again, matching the colors was not easy, and it seems to me that they used a LOT of different colors for this. 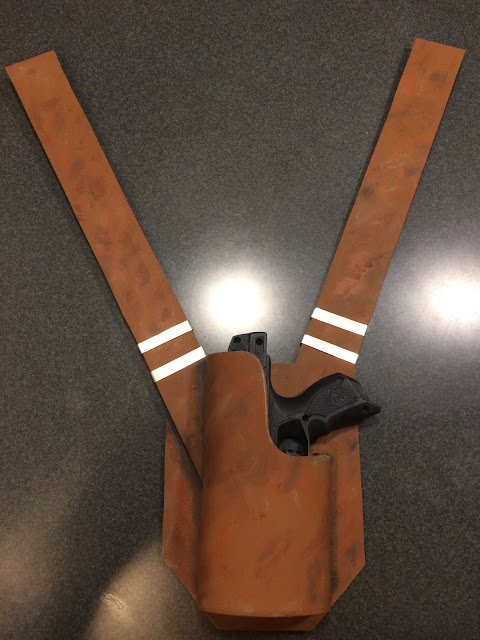 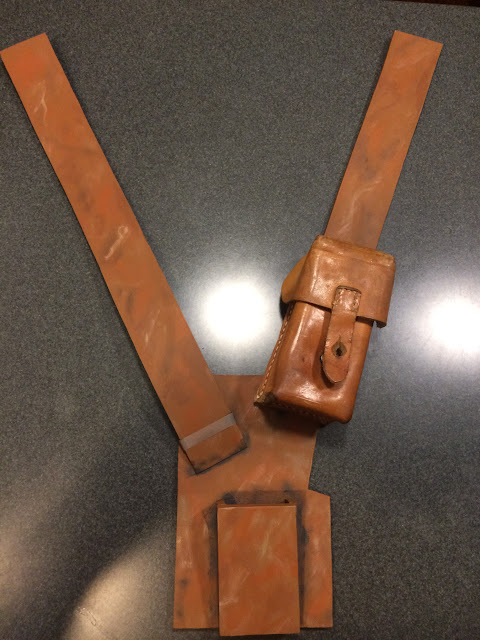 The holsters that Rako sports are clearly leather, but I just could not see dropping the money or working with that material. So....EVA foam! I made these pieces in a "close enough" fashion, and actually changed one of the holsters to fit a gun I wanted to use. Strangely, there is never anything shown in these holsters on the show. I covered the pieces with Plastidip, then primed with a rust colored primer. I used various browns, oranges, tans and greys to mimic leather. For strength, each piece is reinforced with kydex and/or 1" webbing. I have loops of webbing glued to the back for use in attaching to a belt. Aluminum flashing is used to make the metal strips seen on the holsters. I also re-purposed an ammo pouch I found at a gun show - not exactly a match, but close and it can hold my phone and keys and such. We must make allowances. 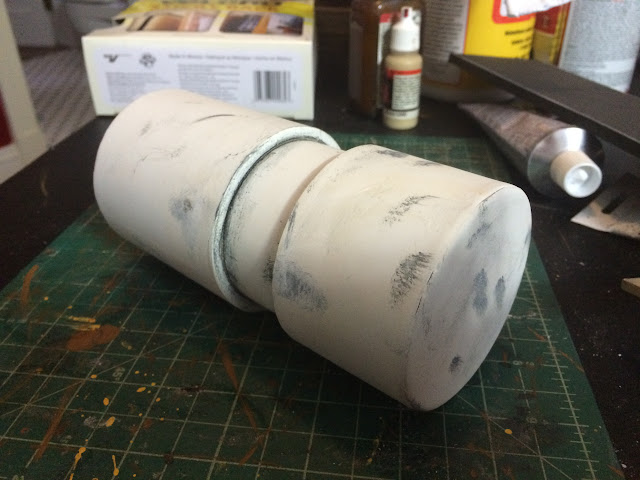 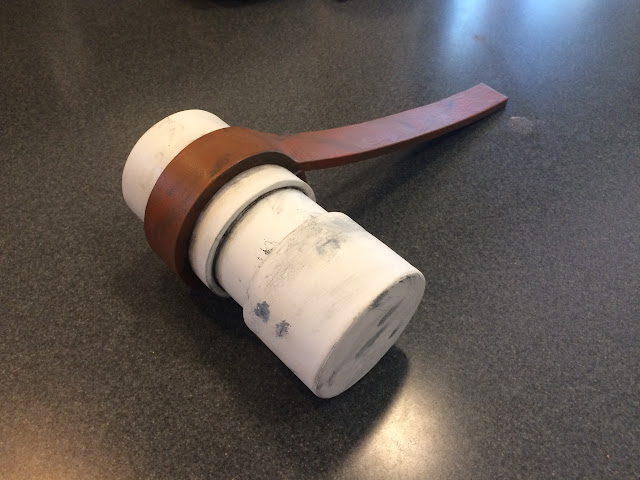 I made the thermal detonator out of various PVC pipe and fittings I found at my local home store. I sealed the ends with EVA foam. Be sure to drill a small hole in the finished product to allow for air expansion/contraction. I made the leather strap out of EVA foam again, but had to reinforce the back with 1" webbing after suffering two breaks - the PVC is heavy. Again, a piece of 1" webbing is used to attach it to a belt. 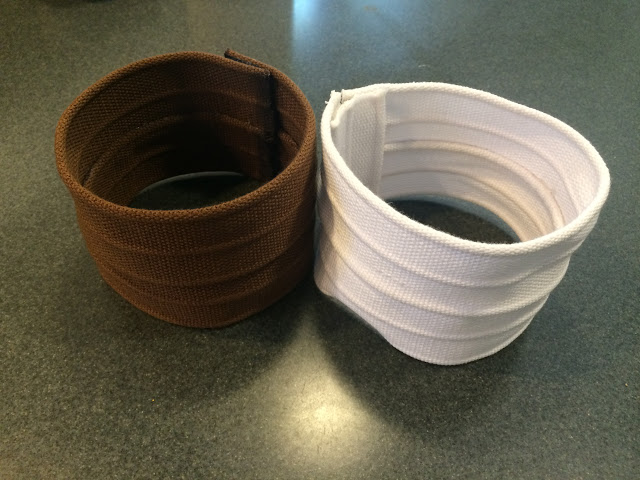 I originally made the arm bands out of cheap fabric I found at a local store, but quickly upgraded to what you see above. These are cheap cloth belts I found online. I hacked them up, glued them together and put some Velcro on them to hold them together. These really look good and I am quite pleased with them. 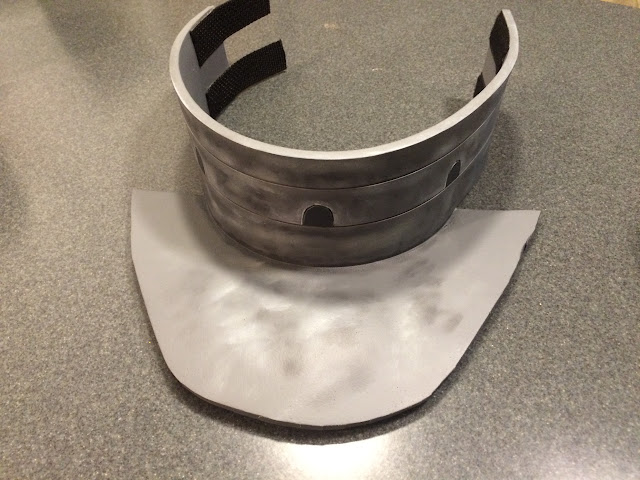 Another re-do was the neck roll. In some of the pictures, you will see the black dickie under my shirt, which worked ok. I was unhappy with the accuracy, and so I made this (above) out of EVA foam. I used a solid piece and cut shallow lines around the neck. I applied a little heat with the heat gun and the lines opened up nicely. I used 1" webbing at the back with magnets to hold the neck piece in place. It is pretty uncomfortable and hot, but it does look good.

For the sniper rifle I cobbled together a bunch of stuff. Honestly, I don't even half remember everything I put together. EVA, kydex, PVC pipe... something... I spent a lot of time on something that Rako has for about a minute on screen in The Cube. If you want to make one, go for it, but it will be a one-off. 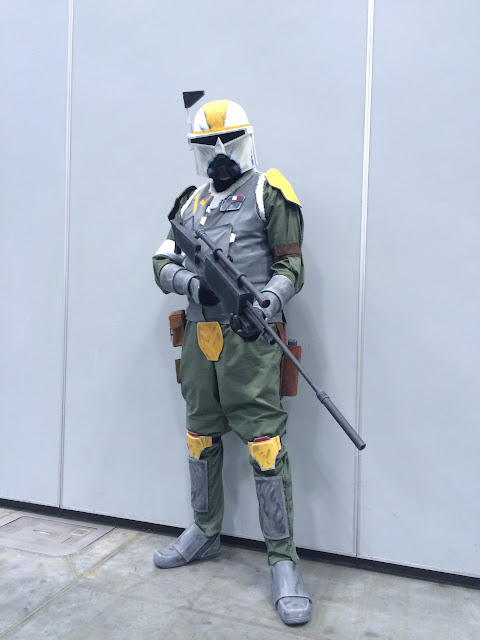 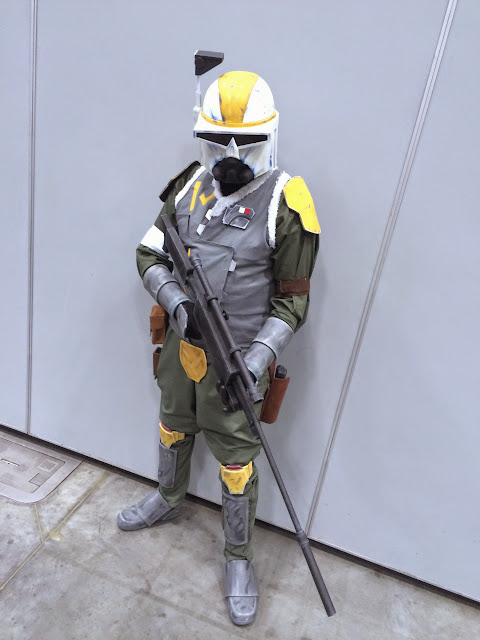 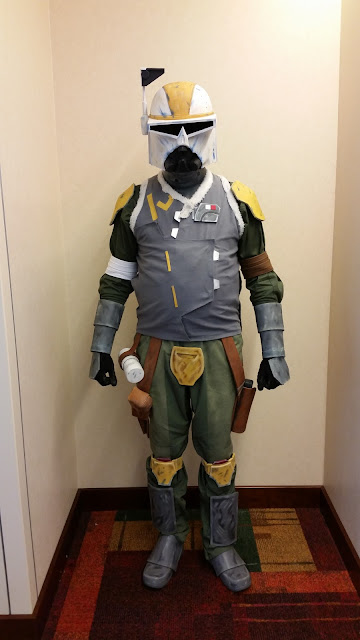 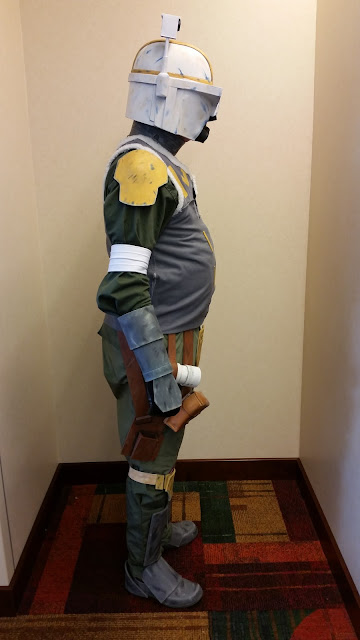 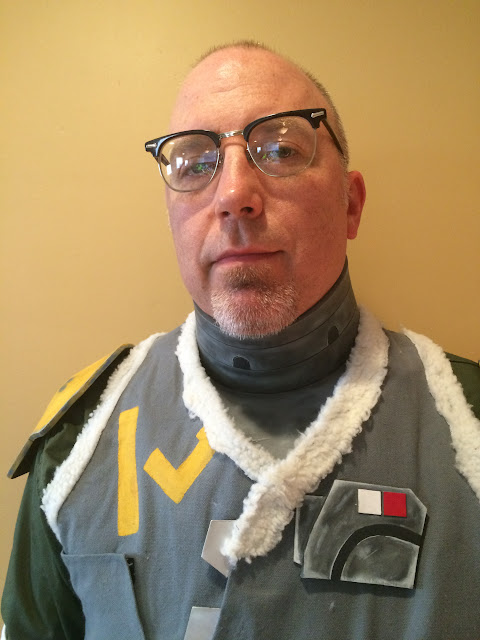 I am quite pleased with the way this turned out. Most people cannot identify Rako Hardeen, but they know it is "something Star Wars!" I really don't care, because the people who DO know Rako, freaking love this, including me!

If you have questions, please post something in the Forums! 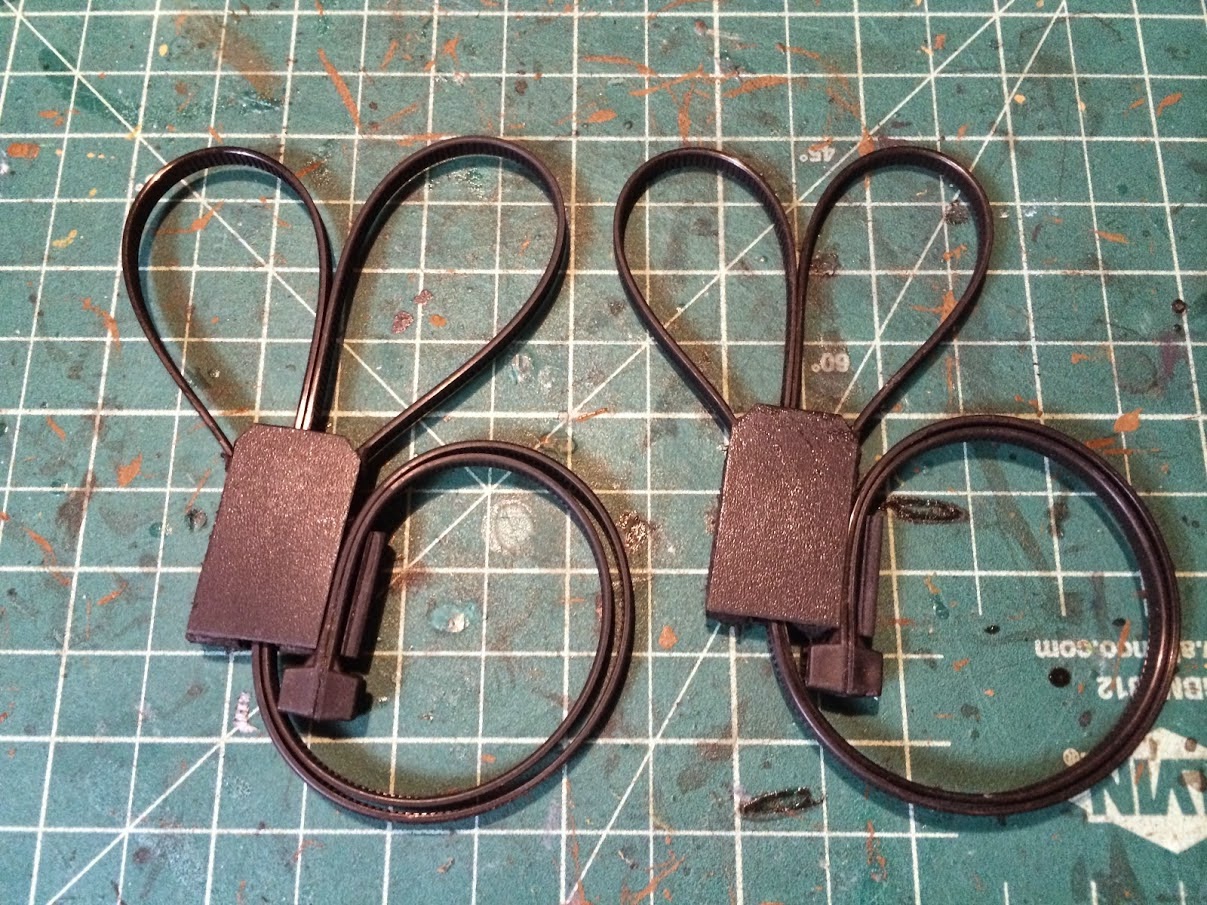